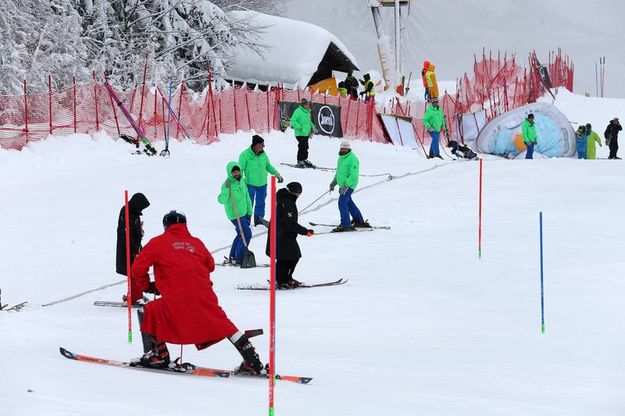 Piste Workers Have Left their Hearts on the Race Track

The 55th Vitranc Cup has now been succesfully completed. It was accompanied by the sun, rain, snow ... as well as the top skiers from all over the world who like coming to the foot of Mt.Vitranc.

It was also acompanied by a huge crowd of cheerers, and we were really very pleased that they have joined us at the foot of Vitranc and that they like following the alpine skiing events.

However, the Vitranc Cup is also about numerous piste workers who you never see or hear from, as they work on the race course and see to it that world's best  skiers have the best possible  conditions for each competition. This year, we would like to say a big THANK YOU to  everyone who has in any way assisted in the execution  of the Vitranc Cup. For your diligence. For waking up in the middle of the night. For your strenght with which you were  removing newly fallen snow off the race track. For your continuous good mood and good will, which, despite the difficult situation on the slope, never ran out. It has been shown once again that a top competition can be carried out where people put their hearts into it. Where people live for the race. Where people show that we  can work together.

Thank you all. And see you all at the 56th Vitranc Cup!