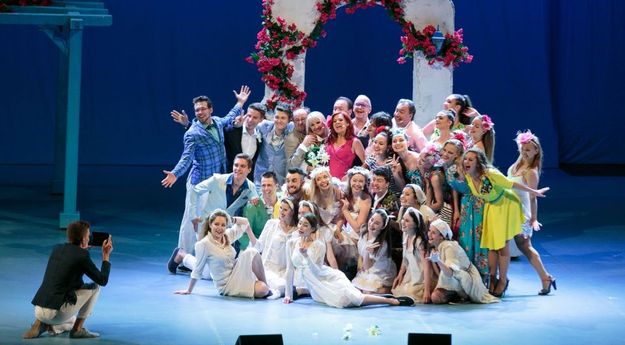 Musical Prelude to a Ski Weekend

Come and see the musical Mamma Mia tonight at 19:30 in the Vitranc Hall  in Kranjska Gora.
Musical MAMMA MIA! revives the musical legacy of the legendary group ABBA. Ever since its premiere in 1999 in London’s  West End, it has been staged in more than 40 countries and 170 cities around the world, seen by  over 54 million spectators.

A romantic story, full of optimism and life energy which  takes place on a Greek island, under the direction of Jug Radivojević, is performed by a 41-member cast with famous Slovenian singers and actors such as Alenka Godec, Simona Vodopivec Franko, Damjana Golavšek, Uroš Smolej,  Gojmir Lešnjak - Gojc, Marjan Bunič, Lea Bartha, Matjaž Kumelj and many others.

ABBA’s evergreen hits have, accompanied by exceptional choreography by Mojca Horvat and under the conductor's baton of maestro Patrick Greblo,  for the first time been performed  in the Slovenian language,  whth excellent translations by the Slovenian musician and songwriter Tomaž Domicelj.